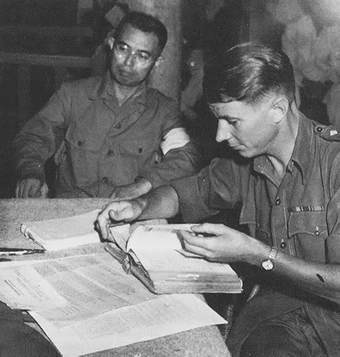 Mori Yoshitada with his British counsel. IWM SE 6942.
Mori Yoshitada was the officer in charge of the Kajang police station from 29 November 1944 until the Japanese surrender on 15 August 1945. (British reoccupation occurred in September. In the interim, the Japanese administration remained in control.) He arrived in Malaya on 11 November 1942 as a Civil Affairs Officer. He was stationed in Singapore until 10 March 1944 as Administrative Police Officer, then transferred to Kuala Lumpur, and later Kuala Kubu, Selangor, on 29 March 1944, assuming responsibility as Officer-in-Charge of the Police Department (O.C.P.D.). He continued in this position of responsibility when he was transferred to Kajang, Selangor.

Background - In Brief
On 10 March 1945, brothers Lee Ah Yin and Lee Lim Chiang (farmers from Sungei Jeloh; contemporary name: Sungai Jelok), Chen Hoi Chin, Lee Boon Lee and Chen Foh Shin were detained and held in the police lock-up. They were tortured over the course of their incarceration. Lee Lim Chiang died while in custody. Mori was prosecuted for ordering and participating in their arrest, detention and ill-treatment.

Death of LEE LIM CHIANG (torture and subsequent death in custody)
According to the deceased's brother, Lee Ah Yin, Lim Chiang was beaten at least once daily from the day they were arrested. Ah Yin named several Chinese detectives under Kempeitai employ who were involved in ill-treating the men -- Lim Sin Fook, Lu Chin, Len Sha, Hu Ah Min. Lim Chiang was also escorted out of the police station "to make arrests" -- i.e. to point out anti-Japanese individuals in the town -- and when this maneuver was unsuccessful, Lim Chiang was subjected to water treatment. As the days wore on, Lim Chiang succumbed to his injuries. Ah Yin testified that he was held in the same lock-up and tended to Lim Chiang as he deteriorated: "...he became mad. He was raving, singing and talking nonsense. He was black and blue all over the body, his head was broken. Blood flowed out and this part (pointing) was broken." After a particularly brutal beating, during which Ah Yin testified that he saw Mori stomp on Lim Chiang's head, Lim Chiang was returned to the lock-up. Ah Yin testified that Lim Chiang did not receive medical attention; he subsequently died nine days later.

Death of AKOB (execution)
Lee Ah Yin testified that Akob had tried to escape with several other prisoners, including an unnamed Chinese civilian who was shot during the unsuccessful attempt. Excerpt from his testimony: "The Japanese O.C.P.D. [i.e. Mori] went up to the cell, asked Akob to come out from the cell and stand about 10 feet away from the lock-up. He asked a [Malay] police constable to load his gun and shoot him. He [Akob] stood with back against the wall and asked not to look, so he turned his face aside. A shot was fired. ..He was left dying about an hour and then some people from the hospital took the body away."

Ill-treatment of LEE AH YIN, CHEN HOI CHIN,
Lee Ah Yin testified that during his 45 days in custody, he was punched, beaten with sticks and hung up by the arms. He also testified that Chen Hoi Chin's "foot was stabbed with a sword by the Japanese O.C.P.D" [i.e. Mori]
NOTES
​
Problems with court interpreters' translations
During the cross-examination of prosecution witness CHEN FOH SHIN, Mori asked the court, through his defence counsel, if the court translator could translate into Malay as "he believes the interpreter is leading the witness" and if the translation was in Malay, he could perhaps follow. The President then cautions the interpreter that he "must translate in full. It is not permissible to indicate in any way what the answer may be." The Prosecutor then chimes with "he is the official court interpreter of this district." The President then asks how Mori is "able to check this at all?" to which the Defence counsel answers: "The prisoner does not understand this but feels it is not quite straight. It is a little too glib for him. He suspects it is not a clean translation." The President then seems concerned, and says, "I am afraid we cannot accept that. Are you satisfied that the prisoner has an adequate translation of what is happening?" The Defence, in reply, requests permission to "change the interpreter to the prisoner." Following this, questioning of CHEN FOH SHIN continues.

What occurred in this instance is unclear. It appears as if Mori was questioning the court interpreter who was interfacing with the prosecutor and the witness. However, that the issue seems to have been laid to rest with changing the interpreter 'to the prisoner,' does that mean that Mori was dissatisfied with what was being translated back to him in Japanese? Does that mean that there were two court interpreters at work, one for the witness, another for the prisoner? It seems more likely that Mori was unhappy with the interpreter who was translating the questions from the prosecutor to the witness, and the replies to those answers from the witness. And if so, how was this solved by changing Mori's interpreter? Or was this exchange, somehow, erroneously recorded by the stenographer, and as a result, this scenario has been made more perplexing than it actually was?

This exchange is interesting because it highlights the challenges of language barriers throughout the many trials conducted in Malaya and Borneo. I believe it's worth bearing in mind why such difficulties existed:
The civil service of the time, as is expected given that these territories were British colonies, conducted its business primarily in English. The local population however was racially diverse and even within each racial grouping, there were subgroups with distinctively different dialects. It was no easy task to get the resources needed -- such as interpreters well versed in multiple languages and dialects -- to aid in war crimes investigations, let alone war crimes trials.
Further, the majority of local witnesses (at least among those I have encountered in the reams of transcripts I've reviewed) do not appear to be literate; as a result, their answers tend to be clipped and abrupt, not particularly descriptive, yet peppered with colourful, pidgin expressions -- this is apparent especially when the court interpreter translated their words literally. E.g. I came across a transcript where a witness' testimony was translated to include the words 'save life!' It would probably have been more helpful if the interpreter had translated this as 'help!' Instead, he  translated the Chinese cry for help -- jiùmìng (救命) -- literally. There are other examples where literal translation can introduce confusion. E.g.  It is not unusual to use the expression 'beat to death' in Chinese to suggest a very severe beating. Rendered literally into English however, it suggests something else altogether -- that the victim expired. And in another case I came across, the prosecutor became agitated and frustrated when he tried to establish the time frame for a torture session. The interpreter translated the witness as 'five minutes,' later 'half hour' and again, when pressed, offered 'five letters.' In Chinese, the expression 'five letters' means 25 minutes; so the witness apparently claimed he had been tortured for about half an hour or just under half hour. ​