Death of KOW PAT, LEI TEN, LEE KIM KHOOI, HEW MOW, KOW CHENG and WONG YEW
On the 28 April 1944, a party of 60 Japanese soldiers led by Corporal Hamada Kazumi raided a village at Kuala Kubu Lama, Selangor state. The raiding party had fired a shot into the air when they arrived, causing the villagers to run helter skelter. The remaining villagers were rounded up, and a house to house search ensued, following which poultry and blankets were taken. Seven men, comprising the above named victims and LEI KOW, were made to kneel down in a row with their hands tied behind their back. According to LEI KOW, they were not questioned by the Japanese during this time. The seven men were herded into a house belonging to Lim Loo Choon. Corporal Hamada, along with seven or eight subordinates, bayoneted the men inside the house before setting it alight. Several shots were also fired into the burning house. LEI KOW was bayonetted but managed to untie himself. He testified that he saw KOW CHEN run out the front door. LEI KOW escaped through the back of the house without being observed by the Japanese.

LEI KOW was asked to show the court the place where he was bayoneted. The court transcript indicates that "witness exhibited one spot on the left chest and two on the back." LEI KOW testified that he returned to the scene two hours later where he saw the charred bodies of his neighbours and the body of Kow Chen lying outside.

Witness Lee Fut Siew claimed that he was hiding in a bush about 40 yards away from the house that was set alight. He testified to seeing the villagers being rounded up, watching the seven men being led to Loo Choon's house, and of observing Hamada (who had a pistol and a sword on him) borrowing a bayonet from another soldier's rifle before he stepped into Lim Loo Choon's house. He could not testify to witnessing the bayoneting with his own eyes but claimed he heard screams coming from the house. He testified that he saw a bloodied LEI KOW leave from the back of the house, and of witnessing KOW CHEN running out of the burning house. He testified that KOW CHEN got as far as a nearby bridge before being shot by Hamada, who was about eight yards away, with a pistol. After this, the raiding party left the village.

Several hours later, along with about ten other neighbours, Lee Fut Siew went to Lim Loo Choon's house and saw the charred remains. When asked to describe if he could recognise the victims, Lee Fut Siew stated, "Burnt beyond recognition. Some were lying on their faces, some on their sides." KOW CHEN's body was found next to a tree, near the bridge. When asked what they did with the bodies, he replied, "We did nothing that same day. We were afraid and returned next day at four p.m. We got all six bodies buried."

On 25 September 1945, LEI KOW, Lee Fut Siew and another unnamed villager, identified Hamada from about 150 to 200 Japanese civilians and soldiers present at an identification parade. According to RAF Squadron Leader Charles Edward Jackson, who was also the District Officer of Kuala Kubu Bahru, he had been present, along with the Major Husha Singh (Rajputana Rifles) and another police officer. They had escorted the three witnesses to the parade grounds, where the "Japanese personnel" were lined up in columns of five. Jackson testified that when they got to the third row, the three witnesses "made a concerted effort towards one Japanese [Hamada]" and "I thought at the moment they were going to assault the Japanese."

Defence
The defence criticised the identification parade as being "irregular" and a "wash out" as all three witnesses were "walked up together" and suggested that LEI KOW could have influenced the other two. District Officer Jackson, in his reply, stated: "I am not competent to answer that, but I do know recognition of the accused was mutual. They all made a rush."

When cross-examining LEI KOW, the defending officer suggested that LEI KOW was known to Hamada as Shu Tai, and that in July 1945, Hamada had arrested him and interrogated him to reveal the whereabouts of nearby Communist activities. According to Hamada, Shu Tai had given up the location as Pratak. The defence argued that because of ill-treatment by Hamada in July 1945, LEI KOW had an axe to grind with Hamada. LEI KOW however denied that he had ever gone by the name of Su Tai or that he had been arrested by Hamada in July 1945. When accused that he had been "in league with the notorious Chinese bandit Communist Party," LEI KOW replied, "No, not so. I devoted all my time to planting food crops; I have a lot of children." The defence then challenged LEI KOW again: "Finally, I put it to you, to pay off your old scores you found a splendid opportunity on the twenty-fifth of September to point your finger at this accused as the person who perpetrated this alleged war crime." LEI KOW replied: "There is no reason why I should point to him. There were a lot of people I could have pointed to."

When cross-examining Lee Fut Siew, the defending officer suggested that LEI KOW had identified Hamada first during the identification parade. Lee Fut Siew denied that this was so, claiming that he was only "a bit behind" LEI KOW and that "before his shoulder was touched [by LEI KOW], I recognised him." The defence also tried to make out that Hamada was known locally as a "notorious chap" for ill-treating civilians and that Lee Fut Siew was aware of his bad reputation. Following this line of defence, the defending officer asked Lee Fut Siew: "What grounds have you personally to hold a bad opinion about this prisoner Hamada -- personally." Lee Fut Siew replied: "He burnt down my house. Food and clothing were destroyed." When asked when this incident had occurred, Lee Fut Siew indicated that his house was burnt down on the same day that the mass killing had taken place, that is, 28 April 1944. The defence was unable to show that Lee Fut Siew had been ill-treated by Hamada on another occasion.

Hamada, in his defence, denied recognising any of the victims or their names (including LEI KOW's). He stated that in September 1944, he was in another state, Johor, and did not know why this case had been brought against him. He testified that during the identification parade, he had been identified by Shu Tai and not LEI KOW, even providing a different description of the man. Further, Hamada denied he had arrested seven civilians, made them kneel down, escorted them to a house or bayoneted them. And to his recollection, he only remembered burning a house or houses in a place called "Lama" in the month of May 1944 but not April 1944. When asked what his function was in the month of April 1944, Hamada testified that his function was "to collect information about Communists in Kuala Kubu." However, when asked if he was attached to the Kempeitai or military police, Hamada confirmed that he was attached to an army garrison, Ajiro Company.

During cross-examination of defence witness Captain Ajiro Masanori (Hamada's commanding officer), Ajiro confirmed that Hamada was attached to his Fourth Company and that in April 1944, "Hamada was Lance-Corporal and as one of the privates (O.Rs) had no special function." However, when asked if Hamada was tasked with investigating evidence of Communist activity in Kuala Kubu, Ajiro stated: "He had no functions to collect information about Communist activity in Kuala Kubu." 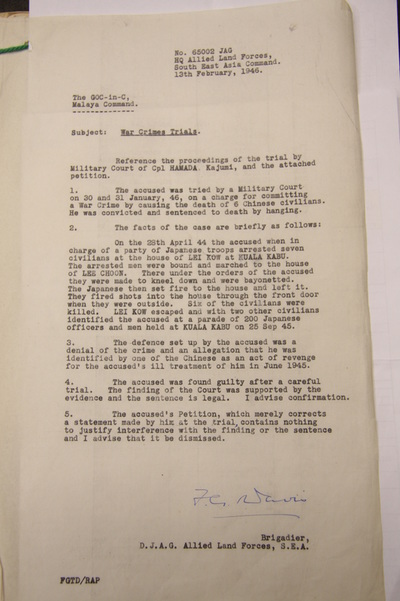 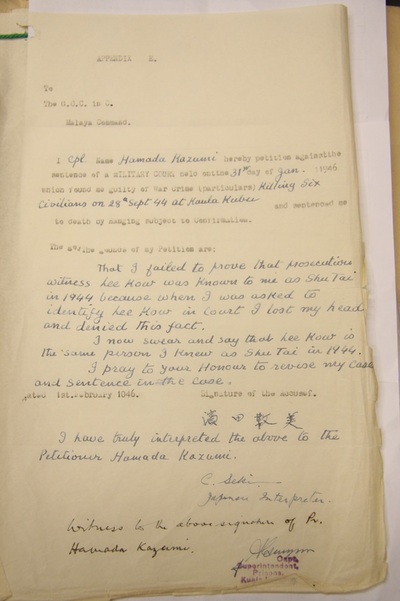 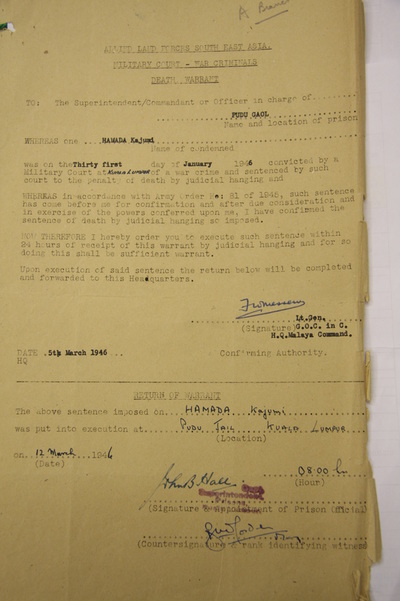